This interview was originally featured in our Fall 2019 edition of Community Matters.

Tim Brodhead is widely recognized as an innovator and thought leader with a passion for the not-for-profit sector. He recently shared his perspective on a range of topics: from his early days as a volunteer overseas to his role as an Ottawa Community Foundation (OCF) board member, and from working with Indigenous peoples to his thoughts on climate change.

When Tim graduated from McGill University and journeyed to Nigeria to volunteer, he essentially started on a path that led to a 25-year career in international cooperation in the non-governmental organization (NGO) sector, followed by 25 more in the foundation world in Canada.

“I returned home from overseas with a deeper appreciation of the advantages we have in Canada, but also of the challenges we face in creating a more inclusive and equitable society,” Tim recounts. “The sector seemed to me to be the best place to engage Canadians in addressing those challenges.”

Tim founded several organizations and served on countless boards. He later became president and CEO of the J.W. McConnell Family Foundation in 1995, a position he held until 2011. In this role, he helped advance its mission of supporting social innovation, inclusion and sustainability. During his time, he also helped create the Community Foundation of Greater Montreal. 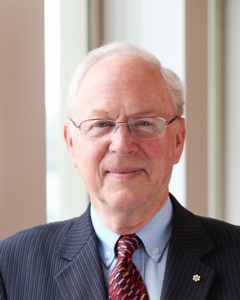 In 2001, he was appointed an Officer of the Order of Canada. In his citation, Tim was recognized for his leadership in the Canadian NGO community, his work on international cooperation and his drive for social justice, among other accomplishments.

When he returned to Ottawa from Montreal after he retired, he felt a natural pull to connect with the OCF where he could get a better sense of what was being done to create a more dynamic and innovative Ottawa. “Community foundations offer one of the most flexible and dynamic ways to tap into, and support, local community generosity and initiative,” Tim notes.

He joined the OCF board in 2016, and points to the Community Grants Program as the most rewarding part of his time on the board – gaining insight into the amazing range of initiatives the OCF supports in the community. He also recognized the OCF’s leadership in responsible investments and impact investing, and how it stewards its assets towards vehicles that see both a financial and social return.

“Right now, I am most passionate about reconciliation—creating a different relationship with Indigenous peoples based on respect and reciprocity. Living in a democratic society, we all have a responsibility to play our part.”

Tim also believes the climate crisis is the great existential issue of our time. Framing it as a test for society on the same magnitude as World War II or the Great Depression, Tim reiterates the need for all citizens to act in the face of this challenge. In his view, each of us can undertake individual action, but we must also impress on our leaders that we support large-scale change, however inconvenient it might be in the short term.

Community leaders and organizations like the OCF are playing an increasing role in providing opportunity and leadership. While Tim believes Ottawa is a healthy city in many ways—public services, access to nature and other activities, a well-educated population—there is much to be done. “We have far too many people living in poverty, in inadequate housing, facing discrimination or exclusion,” he warns.

But he recognizes organizations like the OCF are leading a city-wide movement to tackle the issues. “The Ottawa Community Foundation channels individual generosity into collective action,” he suggests. “We are identifying emerging problems that are still on the horizon, and are providing the means to enable citizens to help improve our city.”