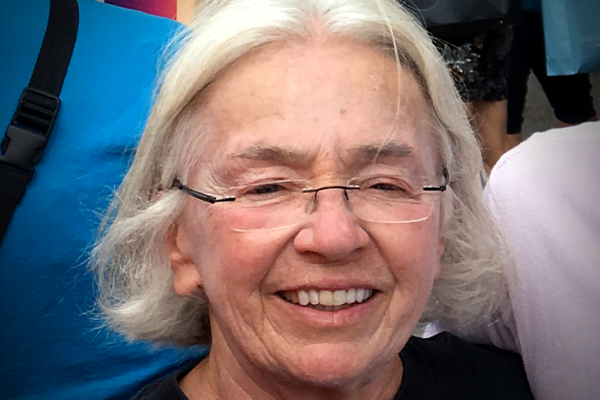 Judy Girard was a role model and leader in the development and enhancement of services for the Ottawa LGBTQ2s+ community.

In the late 1970s, Judy joined the board of Ottawa’s first LGBTQ2s+ community group, Gays of Ottawa, and led the initiative for sister organization Pink Triangle Services (PTS)—now Kind Space—to become the first LGBTQ charity in Canada. She helped raise funds for PTS by organizing its legendary gala for many years. She also participated in LGBTQ2s+ sensitivity training for Ottawa Police Services and other organizations after violent attacks and murders of gay men occurred in Major’s Hill Park in the 1980s.

Judy helped other communities where equity, inclusion and social justice needed an advocate. As a teacher at the School of Social Work at Carleton University, she championed education and the importance of culturally appropriate programs within a human rights/social justice framework.

This fund is intended to build upon Judy’s legacy and advance LGBTQ2s+ community programming and services.

We may occasionally provide lists of donors to the main contact for the fund. You can choose to make your donation anonymous at the bottom of the form. If you have any questions about making an online donation, please contact Fateema Sayani at fsayani@ocf-fco.ca.

You can choose to make an Endowed or Flow-through donation by letting us know in the last question on the donation form.

Endowed donations: These donations are invested and only the earnings generated through that investment are distributed in the form of grants. You can be confident your donation will give for many more years to come.

Flow-through donations: These donations are not invested in our investment pool to generate annual earnings. They can be granted out immediately on the advice of the fund’s representative(s).

Please note some funds are strictly flow-through — all donations to these funds would be flow-through regardless of your choice.

What’s the difference between Endowed and Flow-through Donations?